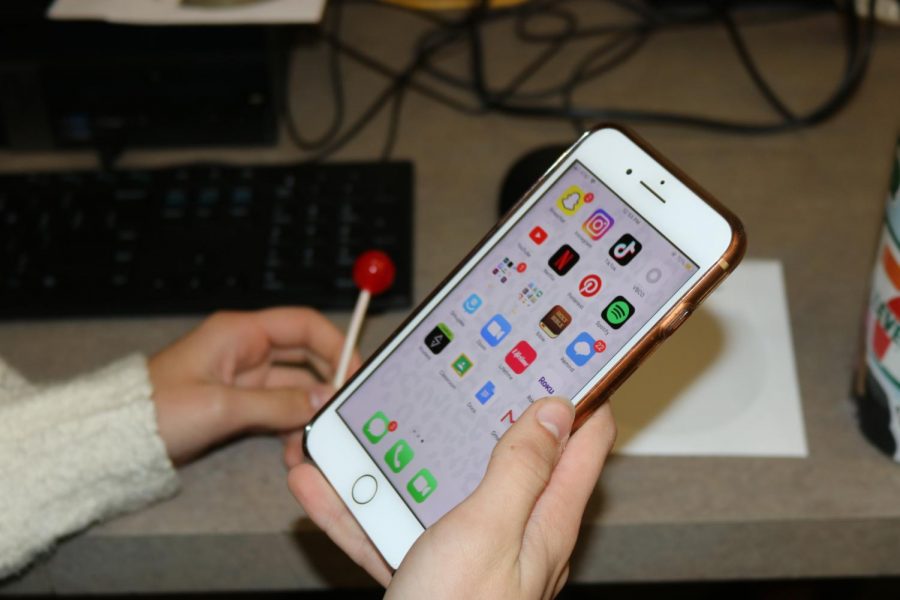 iPhone user, Ella Haggerty, decides what to do on her phone.

Long story short, iPhones are the better phones, according to CHS. Although many types or brands of cell phones are used, the most popular two are the Apple iPhone and Android devices. As some may know, there has been an ongoing feud between the users of these cell phones. Some think iPhones are better and some think Androids are better. The students of CHS are here to end the battle!

There are many differences between the two such as size, shape, material, camera quality, software, etc. When asked what the differences between an iPhone and Android are, sophomore Lauren Hamby stated, “The major difference everyone knows of is the camera quality, 100% iPhones have better quality with photos.” Many have heard about the camera differences and it is proven that iPhone’s have photos with a higher micron pixel. Both of the phones have different features and some better than the other, but after a survey was sent out to the students of CHS, it was clear that the iPhone won the battle. One hundred and six students responded and it was discovered that 73.1% of students preferred iPhones, whereas 26.9% of students preferred Androids.

The iPhone has 29 devices and many versions of each phone. Hamby also stated, “I personally prefer iPhone over Android.  I have an SE that recently came out truthfully, I like it a lot because it’s smaller and easier to carry around but it does the same stuff as a newer phone would.” When the students were asked what their favorite iPhone was, there was a large variety of answers. The top picked iPhone was the iPhone 11.  Even though some of the phones are older than others, many people still prefer the Apple iPhone.

On the other hand, Android has released over 24,000 different devices. Android is made up of 1,300 brands also. Even though there is a wide variety of devices that can be purchased, CHS students picked the Galaxy as their favorite Android phone. Sophomore Gabe Shelton said, “I like Androids better because they don’t break into a million pieces. I have a Galaxy S9 and the best part is that it has just as good of a camera as an iPhone 11.”Like the iPhone, one of the Androids best features is the camera along with the durability of the phones.

So in conclusion, most of CHS prefers the iPhone over the Android. As more phones are being introduced to the consumers, the opinions of students may change.