"Blake could arguably be the best percussionist to ever participate in the Cape Central Band Program." 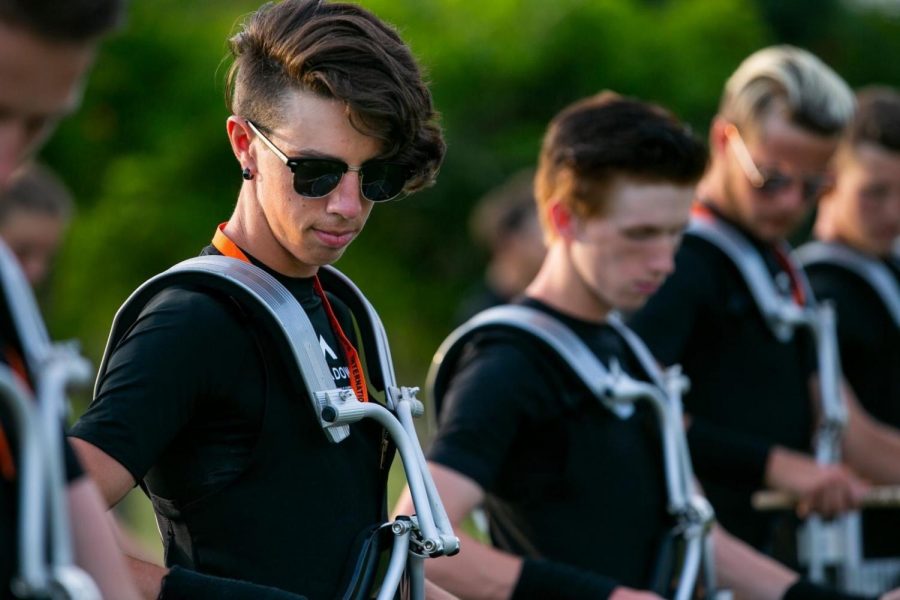 On April 29, Blake Crowson passed away from injuries sustained in a car crash on US Highway 61 (KZIM KSIM). As a CHS student, Blake was greatly admired by many students, teachers, and school administrators, and his talent for music, especially percussion, impressed listeners all around. Crowson was scheduled to be a part of the 2020 Shadow Drum and Bugle Corps snare line, as well as recognized for the Bill Ewing Jazz Award in the 2020 CHS Night of Excellence. Amid his outstanding achievements, Blake also served as a mentor and friend to many marching and jazz band members. Listed below are many memories recalled by CHS students and faculty about Blake, and his impact on Cape Central.

“Blake Crowson was a lot of things to me; he was someone I looked up to musically and he was an amazing friend. He never once mistreated me and always made me feel like I was “part of the gang.” Blake was an extraordinary percussionist. You give that man a pair of sticks and a drum and he’d show you things you didn’t even know could be done on one. He was also in the marching band for four years with me, and I know this past fall he marched in a drum corps called the Shadow Regiment. There was not a day that passed that I wasn’t excited to see that dude during jazz band or at all, to be honest. He never failed to make me laugh or smile, always treated me fairly and so much more. This was a really heavy loss for me, and I’m really gonna miss him. The dude meant a lot to me.”               – Micheal Alexander

“I always considered Blake to be the only cool guy I’ve ever met, he just had this “cool aura” around him that made everyone look up to him. He always seemed to not worry and look care-free, something which I know a lot of people look up to. I spent the most time with Blake at the All-State Band audition. To make a long story short, the day was going to crap, we didn’t have any instruments to audition with and the amount of stress at that moment was to the max. But Blake was so calm and really helped me stay focused, and when we got the instruments we needed, Blake nailed his audition and was so happy afterward. I will always think of Blake as the ideal happy person that I always strive to be like.” -William Clippard

“Blake was the most generous person I have ever met. He gave me rides to swim practice every day and even used a little extra gas to stall and listen to music and goof off beforehand. He was so goofy. He’s the type of guy who if you tell him you’re tired, he’ll leave you a coffee in your band locker. He went the extra mile to be there for everyone he possibly could. We never talked before and he offered to give me a ride home when I missed the bus. He was always super polite and respectful. He was always amazing with parents. He would text my parents to ask permission to hang out with me.  . . .He worked so hard at everything he did, and it really paid off. He was a really funny guy who brightened up a room when he walked in. If he notices that you’re having a bad day, he’ll do anything to make it better. He is the kindest person I’ve ever met. I’m glad I got to know him. He drummed on everything, even if he didn’t have drum sticks or a drum pad, he’d drum on your leg if he had to. His passion showed through and it was contagious. He made you want to work harder.” -Bre Wright

“ Blake and I had the weirdest friendship. Since we started becoming closer for the first time since junior high because of the ACE program, I think it’s safe to say we both were tolerant of each other and acknowledged that the other was cool and fun aside from the fact we disagreed in every subject. I am not kidding when I say that one day we would get into heated debates/arguments in the lobby while waiting for our EN100 class to start, and then the next day we would literally complain about life every 50 minutes in our classes. The next year (this year!) was even better. . .  we only talked about once a week or so, but there were moments when things got candid and in those moments, I would trade anything to see again. But in those times where he was genuine, you would know exactly how he would be thinking. How much he cared for the people he loved, how much he felt happiness and regret, and grief. He was a normal person just like us, who needed reassurance and warmth. He might have rubbed some people the wrong way, but he had a heart of gold under his mammoth of a haircut. Also, he adored his little brother and you could hear his voice change when he mentioned his brother Evan.” -AJ Cook

“He was a kid at heart, for sure. Making immature (but harmless) jokes to cheer us all up. He was an amazing mentor to his drumline family. They always came to him for help. He was a very carefree and patient guy. I think because of his childish nature we were so comfortable around him. If you didn’t know, this past year he attended 2 different camps. He missed most of our camp to work with a professional marching band and still managed to learn our whole show and put together his section. He was a very hard worker and I don’t know how he did it and managed to joke around and keep a smile on his face.” -Anonymous Student

“I didn’t know him very well, but I can say that he was a very talented drummer and a really nice person to everyone. I know he was going to go really far in life.” -Laniah Webster

“Blake was someone you noticed in the hallways of Cape Central. He was always smiling and drumming away in one way or another. He always treated me with such respect, and I believe his drumming abilities were definitely one-of-a-kind. He definitely represented our school and class well through his many accomplishments. We used to be pretty close during my earlier half of high school, and he made the classes we had together far more fun.” – Tyler Helm

“I was in the marching band in the percussion section with him. I’ve never met a more determined and accomplished person in my life. He was so passionate about music and worked his hardest in everything. He was so energetic and bright. He really was fun and pulled people together. He was so generous to others and just so much fun. It’s just devastating that he’s gone. He was so talented and really cared about things and people. He was always so kind and helped everyone who came to him. He was a good person.” -Abby Hansen

“He was really an all-around nice guy when I talked to him. He was funny, nice, and caring. People were excited when he walked in the room.  A lot of people liked being around him and talking to him.” -Zach Marberry

“I could tell he was extremely passionate about what he did. He was super talented and had a future ahead of him. “   -Jack Rusten

“Every time you asked him if he could teach you to play a song or something he said, “Do you have ten years?” Because he had been playing for ten years, and I just thought that was funny” -Anonymous Student

“I met Blake during the fall of 2019. He contacted me to ask if the drumline could perform at the Homecoming Pep Assembly. I’m so glad he asked because they did an amazing job. I had Blake this past semester in Personal Finance. My room is at the end of G South, and he would come all the way from Jazz Band. He would typically get there right on time or right after the bell rang, which I thought was amazing considering the distance. Of course, there would be others that would come in later than Blake and say they were in Jazz Band too. I’d look at Blake and he would just shake his head “No” to let me know they were lying. He was a great student with an outstanding grade. I’ll certainly miss him.” – Patricia Wamble, Business Teacher

“In a sophomore English class, a sea of mostly male students, Blake soon made it clear that he would establish the rhythm and maintain a lively “beat.” His infectious, shy-guy smile and witty sense of humor made him a class favorite. I can still hear him drumming out a beat on his desk while looking me right in the eye, saying, “I’m listening, Cerny.” We will miss listening to the rhythm of Blake in our daily lives.” -Crystal Cerny, English Teacher

“Blake was a freshman during my first year here at Central High School, so I have been able to see him grow and mature throughout his 4 years of high school into an impressive young man. He is a student who always struck me as friendly, accepting, driven, and motivated. I was his high school counselor, but his

joining the ACE early program through Cape College Center led to us building a closer working relationship, which I am thankful for. Blake and I’s meetings typically focused on his academics and future goals, especially college. I know I will miss Blake and seeing his future accomplishments.”  – Angela Mueller, CHS Counselor

“There is a lot to say about Blake. In fact, just a couple weeks ago, I wrote a glowing recommendation about him for a scholarship. Blake could arguably be the best percussionist to ever participate in the Cape Central Band Program. He was also chosen for the Bill Ewing Jazz Award (to be announced on the Evening of Excellence ceremony). Most importantly, Blake was a kind and respectful person. He will be remembered as one of my greatest students.” -Billy Keys, CHS Band Instructor/Director

This is not a complete list. If you would also like to share your thoughts about Blake or tell a story of his life, feel free to contact me or a member of The Tiger 2020 staff, and I will do my best to edit your words into this story.