What Would You Do With 5 Million Dollars? 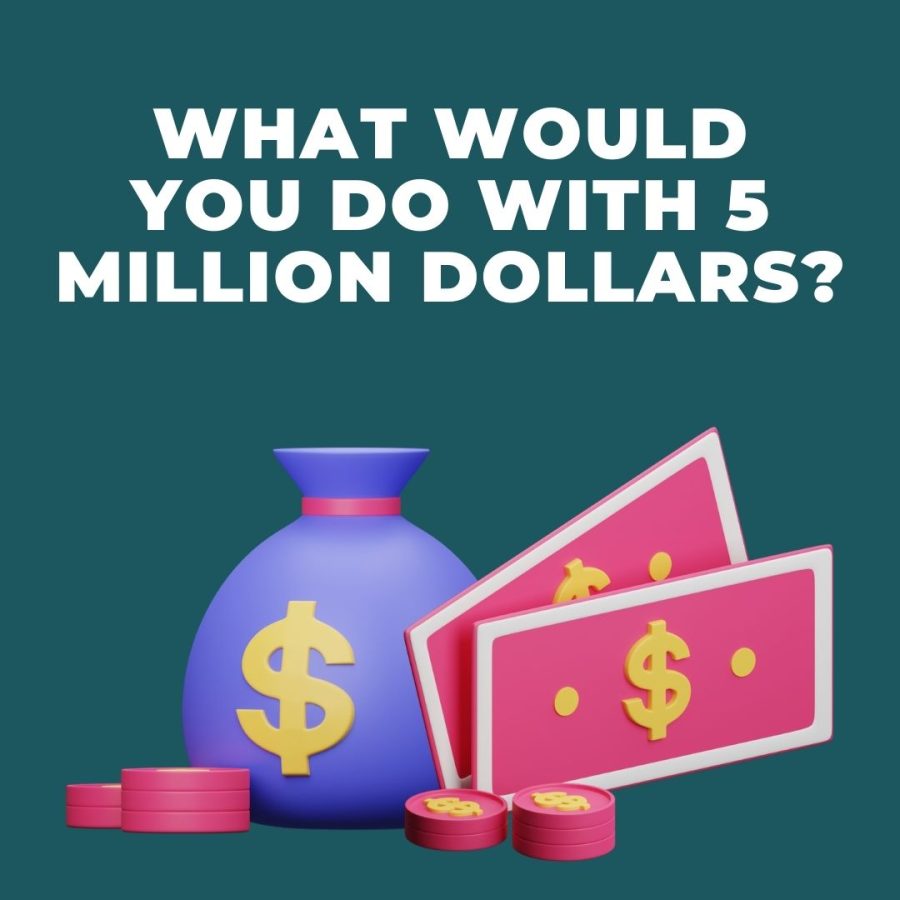 A lottery ticket in one hand, a coin in the other hand, scratching the ticket, hoping for matching symbols to no avail. Scratching the final bit of the ticket, it reveals a match, hitting the jackpot, giving you five million dollars after tax. What would students do with 5 million dollars?
A survey was sent out to the students of Central High School asking what they would do with five million dollars. Twenty-five percent said they would invest the five million dollars. Fifteen percent said they would save the five million dollars. Ten percent said they would spend the money on entertainment and for themselves. Forty-nine percent said they would do other things with the money like giving back to their communities, donating the money, putting the money for bills, college, and other life needs, or a mix of using the money for investment, saving, and entertainment. In the survey, they were also asked why they made the decision to use their five million dollars in a certain way. The reasons why students would use their money a certain way ranged from trying to increase their wealth with the five million dollars to bad self-control, to helping people or keeping their family financially stable.
Luca Sosa, a freshman at Central High School, said he would, “Invest it, half of it. Throw that one-quarter of it that I didn’t invest into saving and use the rest. Half into an investment, a quarter into saving, and I just get a quarter. ”The reason why Sosa would mainly invest is that investment can increase one’s wealth and help make more money.
Mackenzie Thomas, a junior at Central High School, said, ”I would put 2 million into a children’s hospital, I would put a million into clean water for people who don’t have clean water, and I would put the last million into veteran homes.” Thomas’ reasoning for why she would mainly donate her wealth is because of the fact that there are people who need help with the money.
Tracy Antill, a senior at central high school, said she would, “Put it into savings and I would probably donate a big portion of my money to different charities, especially around in Cape because it’s a smaller town and certain people need more help than like the bigger foundation.” Antill said the reason why she would donate a big portion of the money is that there are misfortunes all around the world, so funding and donating to trustworthy and responsible foundations would help the world be a better place.

Would money lead to happiness?
Happiness for a person could be different for another person. People are different and may have different ways of what makes them happy.
Thomas said, ” It’s just there because I always went by the quote ‘money does buy happiness.’”
Sosa said, ”The money would allow me to do things that would make me happy. After it, I would try to maintain a stable amount of wealth to live and hopefully also do the things that I enjoy.”
Antill said, ” I don’t think it can. It depends on what people take as happiness, cause happiness can mean a lot of different things. But for me personally, I don’t think it can buy happiness. I think it can buy luxury items, and make life more comfortable, but that doesn’t mean immediate happiness.”