A Breakdown of the Kyle Rittenhouse Case 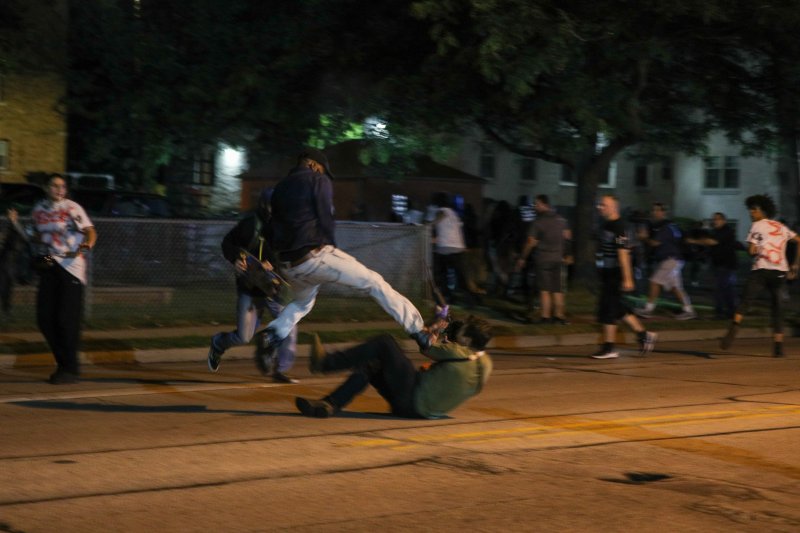 Kyle Rittenhouse, lying on his back as an unidentified man attempts to stomp on his head. Meanwhile, Anthony Huber approaches Rittenhouse with his skateboard in hand. - Image may be subject to copyright (Getty Images).

August 25, 2020 –Kyle Rittenhouse, 17, shot three men, killing two with a semi-automatic AR. Rittenhouse of Antioch, Illinois went to Kenosha Wisconsin during the protests that turned into riots of the Jacob Blake killing, when civilians were destroying property and looting stores.

Rittenhouse claimed to have traveled to Kenosha to protect the city, and render medical aid.

Rittenhouse faced a total of seven charges at the beginning of the trial, but throughout the trial the judge dismissed two charges.

First-degree Reckless Homicide, use of a dangerous weapon (up to 60 years)

First-degree Recklessly Endangering Safety, use of a dangerous weapon (12 ½ years)

First-degree Recklessly Endangering Safety, use of a dangerous weapon (12 ½ years)

The Possession of a Dangerous Weapon by a Person Under 18 charge against Rittenhouse was the prosecution’s ‘slam dunk’ charge. Rittenhouse was surely going to be convicted on the charge because it is virtually impossible to dispute the fact that he was not 18 at the time of the shooting.

The charge was dropped because it conflicted with another Wisconsin law that related to weapons and hunting that only applied to juveniles under the age of 16.

Kyle Rittenhouse claims that every person he shot the night of August 25 was a direct result of him defending himself.

The first person that was shot, Joseph Rosenbaum, was a 36 year old white male, native to Kenosha, Wisconsin.

Prosecutors and Rittnhouse’s defense team both showed multiple videos of the fatal shooting of Joseph Rosenbaum.

Kyle Rittenhouse and the defense claim that Joseph Rosenbaum made an attempt to disarm Rittenhouse, but due to Rittenhouse’s quick-thinking, he opened fire upon Rosenbaum, letting out four bullets that all struck Rosenbaum.

Prosecutors claimed that Rittenhouse made a conscientious effort to fire more than one shot at Rosenbaum, but it was made clear that Ritenhouse fired all four shots in approximately 0.3 seconds, making it virtually impossible to control the amount of ammunition that left the weapon.

Dr. Doug Kelley performed the autopsy on the body of Joseph Rosenbaum and was called to the stand to testify. Dr. Kelley stated that Rosenbaum did indeed have the soot of the rifle on his hand, indicating that when Rittenhouse pulled the trigger, Rosenbaum was making an attempt to get his hands on Rittenhouse’s weapon.

After the shooting of Joseph Rosenbaum, Rittenhouse attempted to flee angry protesters, while attempting to escape to a safe location. Whilst he was being chased, Rittenhouse tripped on the pavement and an unidentified man jumped in the air, attempting to stomp on Rittenhouse in the face.

Rittenhouse opened fire upon the unidentified man, but was unable to connect any shots.

While Rittenhouse was still on the ground, Anthony Huber, a 26-year old white male, had a skateboard in hand, and attempted to swing the skateboard at Rittenhouse.

According to a criminal complaint, “Huber reached for the suspect’s gun with his hand while holding the skateboard in the other. As Huber tried to grab the gun, the suspect pointed it at his body and fired one round. Huber was seen staggering away and then fell to the ground. He died from his gunshot wound.”

The third man Kyle Rittenhouse shot was Gaige Grosskreutz, a 26-year old white male. Grosskreutz of West Allis, Wisconsin, was attending the protest as a paramedic. Grosskreutz was shot in the arm by Rittenhouse, completely tearing his bicep.

Rittenhouse was not the only person armed in his altercation with Grosskreutz. Grosskreutz was armed with a pistol that he admitted was illegal for him to carry because his concealed carry permit had expired.

Grosskreutz described Rittenhouse as an “active shooter,” However, one of Rittenhouse’s attorneys asked Grosskreutz, “It wasn’t until you pointed your gun at him, advanced, on him…that he fired, right?”

Chirafisi, another Rittenhouse defense attorney, stated that Grosskreutz told multiple police officers that he dropped his weapon prior to Kyle Rittenhouse opening fire, but he contradicted himself in court by acknowledging that he was still in possession of the firearm when he was struck by Rittenhouse’s bullet.

The jury began their deliberations on November 16, and have yet to conclude.