Opinion: Are Male Stereotypes Changing in a Changing Fashion World? 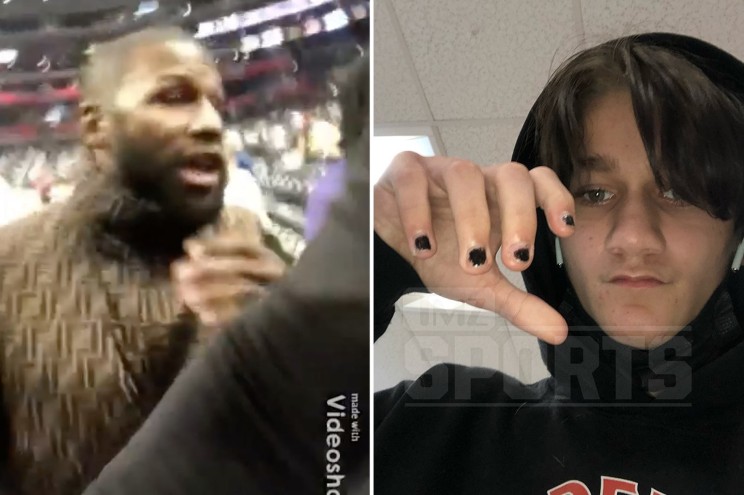 Floyd Mayweather (left) refused to take a picture with an unnamed fan (right) on October 23, 2021.

Note from the Writer:  While I know that there are many different categorization groups of people that see stereotypes much differently than those men do, I have chosen to focus solely on the stereotypes of men.

On Saturday, October 23, Floyd “Money” Mayweather attended the Los Angeles Clippers vs. Memphis Grizzlies basketball game at Staples Center in LA. When a fan requested a quick picture together, Mayweather was heard on video responding, “You got painted nails, I don’t take pictures with guys with no painted nails.” Although some might be quick to brush the situation off as rude or insensitive, I personally believe that this incident just adds to the much too common stereotyping of men and how they should look and act.

Today, many mainstream influencers flaunt the “painted nails” look. Artists like Machine Gun Kelly, Lil Yachty, and Lil Nas X, and actors, such as, Zach Efron, Chris and Liam Hemsworth, and Brad Pitt, are among the top male celebrities to embrace the art on their fingers. Some male celebrities, especially in countries such as Pakistan and Australia, paint their nails in support of “Polished Man,” a movement to raise awareness for child abuse. According to the website, polishedman.com, “Polished Man is not about pointing the finger when it comes to violence, it’s about empowering everyone to become part of the solution.”

With the emergence of mainstream media and progressive fashion styles, painted nails are not the only way that men have been breaking down the barriers of male stereotypes.

One of the main factors of style is the clothes on a person’s body. The “typical” male outfit commonly includes pants, along with a shirt and/or jacket. However, in December 2020, English singer-songwriter Harry Styles used his platform to continue the destruction of this common stereotype when he was featured on the cover of Vogue Magazine, appearing in a dress. During his photoshoot with Vogue, Styles states, “Clothes are there to have fun with and experiment with and play with. What’s really exciting is that all of these lines are just kind of crumbling away. When you take away ‘There’s clothes for men and there’s clothes for women,’ once you remove any barriers, obviously you open up the arena in which you can play.”

Styles has been a role model for many men, especially teens, in the development of their confidence within their own style. He once told Timothée Chalamet in an interview, “I think there’s so much masculinity in being vulnerable and allowing yourself to be feminine, and I’m very comfortable with that.” Reiterating that philosophy, senior Max Moyers said, “I feel that men who dress how they want, regardless of how people think of them, is actually the manliest trait of all. Male celebrities at the Met Gala or fancy events that dress flamboyantly have nothing but respect from me.”

In a 2006 experiment done by Sabine Sczesny, professor at University of Bern in Switzerland, she “tested the influence of physical appearance on the attribution of leadership competence,” according to her academic journal article, “Masculine = Competent?” Sczensny began to explore  if the masculinity/femininity appearance of someone in a leadership role affected others feelings towards their ability to competently lead.

Although society has made tremendous strides since this 2006 experiment, actions like those of Mayweather’s seem to be a recurrence and a much-too-unfortunate reality today. However, with the emergence of fashion trendsetters, like Harry Styles, the question should be asked: Will their influence be enough to continue to break down these stereotypes, or will actions such as Floyd Mayweather’s continue to act as roadblocks towards the work being done by so many influencers?